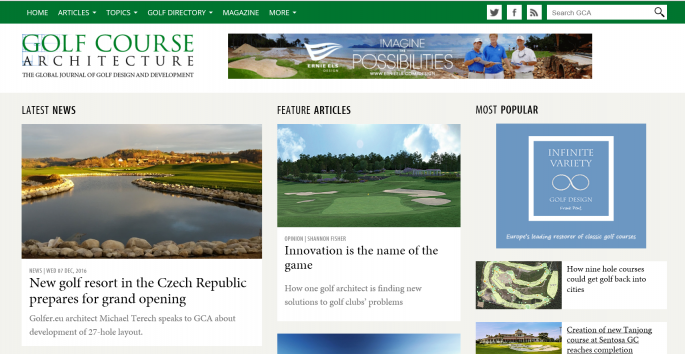 A new golf course in the Czech Republic is expected to be fully opened next year following a successful soft opening this summer.

The creation of a 27-hole course at the Panorama Golf Club in Kacov, Czech Republic, has been conducted by a team from Golfer.eu.

GCA caught up with golf course architect and project manager Michael Terech to find out more.

“Myself and Golfer.eu’s principal director Libor Jirásek have been involved with this project since the very first day, and were appointed in a triple role of general project manager, principal architect and golf course architect,” Terech explained. “With such a complex project, which will eventually include the 27-hole golf course, hotel, restaurant and many additional still-to-build structures – obviously takes time to be develop.”

The Golfer.eu team first began conceptual planning for the project at Panorama Golf Club – which lies around 50km south-east of the Czech capital Prague – almost a decade ago.

“We went through every single project development stage, such as the selection of the site, land acquisition, design, planning and permitting, tendering, construction and grow-in supervision,” Terech said. “We did not rest until the first club tournament, which was held in the summer of 2016. Today, we are still working to optimise and maximise the visitor experience, so that the resort can open to public early next year in top-notch shape.”

Terech explained that the site features great views of the surrounding landscape, and almost 150 metres of elevation change.

“The final masterplan came together from numerous analyses and design revisions,” Terech said. “We worked hard to make sure we utilise as much natural beauty and on-site features as possible. The property is very complex, spreading on more than 100 hectares around a small village and in three distinct sections: along the river, over hilly meadows and into a forest.”

These factors resulted in Jirásek and Terech creating a layout consisting of three individual nine-hole golf loops, each spreading into a different section of the property.

“The loops return back together to the clubhouse, seamlessly blending into one complete golf course,” he said. “Each hole has a wide array of tees, allowing the course to be happily used by golfers of all skill sets. Depending on the combination of loops and tees, one can play a golf course ranging from just over four thousand yards to just under seven thousand yards.”

The project team aimed to give the course in general a ‘rolling parkland feel’, with numerous interesting terrain features and specimen tree plantings.

“All of this was to be complimented by fescue roughs and intricate bunkering to ensure an individual and memorable character of the individual holes is created,” Terech said. “As many site features and vegetation as possible were retained and used to that effect.”

The site also now features many hectares of wildflower meadows and naturalised roughs, more than a thousand new trees, and an extensive network of wetlands and ponds.

“We also managed to combine value engineering and environmental support,” Terech said. “For example, in an attempt to sustainably gather appropriate base materials for the roads and buildings locally, we created a feature, humorously referred to as the ‘Grand Canyon’. This delivers a key strategic interest of risk-reward character inside of a dogleg par-four hole, while at the same time being of the upmost importance for reptiles and other small animals.”

The course offers a variety of interesting features, including split fairways, forced lay-ups, mature trees obstructing some angles of approach and carries over bunkers.

“We really wanted to use the full array of features to make players think about club selection and shot type, instead of manually hitting the ball over and over again,” he explained. “This is also the case with the two special par threes, which play downhill more than twenty-five metres each. Wind and elevation are such a factor here that it really makes you question your play strategy. With that in mind, as well as the aesthetics, I believe it is the ‘thinking process’ factor that account for a special highlight of the course.”

Terech and Jirásek have overseen and supervised the entire construction phase and confirm they are pleased with the course’s final outcome.

“We are really happy with the end result,” he said. “Nevertheless, it is true that one is never fully done with the creative work process, especially on such a complex scale and scope. For this reason we are carrying on our work with the owners toward further extensions and upgrades to the project in the future.”

« другие новости по теме They wrote about us

Категория: pravidla soutěže | Články | Environment | They wrote about us | новости